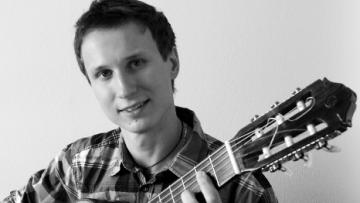 I started playing the guitar at the age of 11 and have not stopped since. My passion for music has led me to study classical guitar at Victoria University, where I graduated with a Master of Music in 2008. While studying, I have also been active as a private tutor in Wellington and taught for a number of music centres there.

Since 2010 I have been teaching guitar in Auckland, and more recently I have also started teaching Ukulele and Bass. I enjoy teaching and watching young musicians develop their skills, and I am committed to providing my students with a fun and engaging learning environment.

Check out this cool song by OK Go - 'Here It Goes Again'. The video clip is awesome! Now that's what I call practice. I wonder how many times they had to do this to get it right....Any guesses?

Jakub teaches at these venues:

Thank you so much also for everything you do for Zach, it was such a confidence boost for him, to get over his nerves, introduce himself, play, make a mistake (and realise the world doesn't fall apart) and then the positive feedback at the end from the audience to top it all off. At the start of the year it was hard to even convince him to play more than a couple of chords with even my parents watching. I think it is such a great outlet for him to have his guitar, he has been playing all the time.

Thank you for the effort you have put into teaching music this year at Titirangi. Austin has really enjoyed his lessons, he has re-gained his love of playing music and started writing his own songs again! It was an amazing opportunity for him to get up and play on stage, increasing his confidence and allowing him to go on and be part of his school band (although playing drums rather than guitar :)).

Thank you so much for being such an enthusiastic teacher, Reilly is loving his lessons and practicing with enthusiasm. We are also delighted that his skill level is increasing!

Thank you again for your teaching & commitment to Caleb's music lessons while he was at Swanson. He loved his lessons with you & the end-of-year concerts were always a highlight for us! Caleb is now at Waitakere College and loving it! We took your advice and he is taking 'Music Advanced' as one of his core subjects. They have a great Music Dept. Caleb aced his preliminary ukulele & guitar tests and will be learning Keyboard next term. Music is his favourite subject & he's keen to join the school band. So, thank you Jakub, for igniting Caleb's love of music! And for being such a great teacher.

Thanks so much for all the amazing work you've done with Isaac this year. We're so pleased what a positive relationship he has with music and the joy it's bringing to his life. You've done an awesome job fostering his interest.